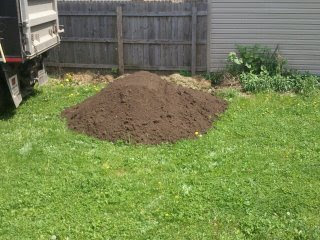 Today, there is  topsoil, mulch and compost.   Somehow, this doesn't look like as much as it sounded like it would be.  It's supposed to be 3 cubic yards.  I've also got a cubic yard each of the mulch and compost, and that pile is about the same size as this.  Good thing it was cheap.
Time to put on my shoes and go move some of this stuff around a bit.  It will be interesting to see how much I get done as I've not slept since yesterday morning.

Answer: not much.  As suspected, the base soil, aka "the yard" is about 1/2 inch of poor clay soil on top of fill dirt and gravel.  I can't even get a garden fork in more than a couple of inches.  It's off to the hardware store for some landscape picks so I can pin down black plastic to kill off weeds and grass, and some shallow pots to plant flowers in until the soil loosens up some.
Posted by Kathy at 3:46 PM 1 comment:

Today I took cat #3, Kali, to the vet.  She usually runs as far as possible when she sees the cat carrier come out, but today she just made a token escape effort, then sat down in patient resignation.  Poor kitty.
She lucked out.  Our vet doesn't give cats boosters will-he nil-he, so she didn't need a Feline Leukemia, parvo or distemper shot.  (She's strictly an indoor cat).   We also discussed how the 'old' cats aren't integrating well with the addition of Bes, the 'new' cat.  We've had him for 14 months now, and Kali still can't stand him.  The past few weeks, though, she's been venturing downstairs more often, and has even come up onto my lap when Bes is also on the sofa.  It seems that our using the same brush on all three of their faces serves to spread the pheromones around and sort of acclimate the cats to each other's smells, according to a recent study.
Another study has shown that if you put cats in separate areas for 8 hours (such as overnight), they have to sort of re-familiarize themselves with each other at the end of the separation, and some degree of aggression may lessen.  I think I may encourage Bes to sleep on a t-shirt or the like which I'll then put down near where Kali likes to nest at night.

In sewing  news, there isn't any.  I've hardly been up to the sewing room for a month other than to sort some books and magazines.  I haven't even been tempted by any new patterns or kits recently!
Posted by Kathy at 6:27 PM No comments:

Today I received my copy of Trish Burr's  Colour Confidence in Embroidery.  It's a gift from my father-in-law.
Pity I don't have a lot of time to sit and read it today, but I'll get into it soon and post a review later.
Posted by Kathy at 3:12 PM No comments:

Kathy
Pittsburgh, PA, United States
Currently a domestic goddess/homemaker with a lovely husband and two cats. Give me a cup of tea and a book or some stitching, and I'm a happy camper.